With a Climate Emergency declared both Nationally and Locally we would like to report what is happening in Kingsdown. Many groups which have been set up to give information about climate change and sustainability so here are links to those groups nearest to us.
Bristol Energy Network.  http://bristolenergynetwork.org

Bishopston, Cotham and Redland Energy Group. Has a Facebook Page or contact  bristol.energy.network@gmail.comClifton Climate Action   Also has a Facebook Page or contact  https://www.cliftonclimateaction.org
Of particular interest to us in Kingsdown is the BCC Petition being circulated on the Installation of Electric Car Charging Plug In Pointshttps://democracy.bristol.gov.uk/mgEPetitionDisplay.aspx?ID=114&RPID=7819415&HPID=7819415
It should be mentioned that reducing the number of cars on our streets would be of greater benefit to us all and we should make more use of the local Car Clubs
And belatedly we would like to thank Brian Harper of Sight Designs Ltd, (of Malvern) who have re-manufactured our historical Gas Lamps in Back of Kingsdown Parade and brought them into the 21st Century with the following improvements, New efficient burners. Automatic operation. Electronic Ignition. Near Zero light pollution. Reflectors optimised for location. Brighter Light. Uses Much Less Gas. Far Lower Maintenance Costs with  80% Smaller Carbon Footprint.
Of interest my be the article on his dog poo powered gas lamp. Maybe Kingsdown should invest in this inventive technologyhttps://www.theguardian.com/environment/2018/jan/01/stools-to-fuels-street-lamp-runs-on-dog-poo-bio-energy-waste-?CMP=share_btn_link
Helen 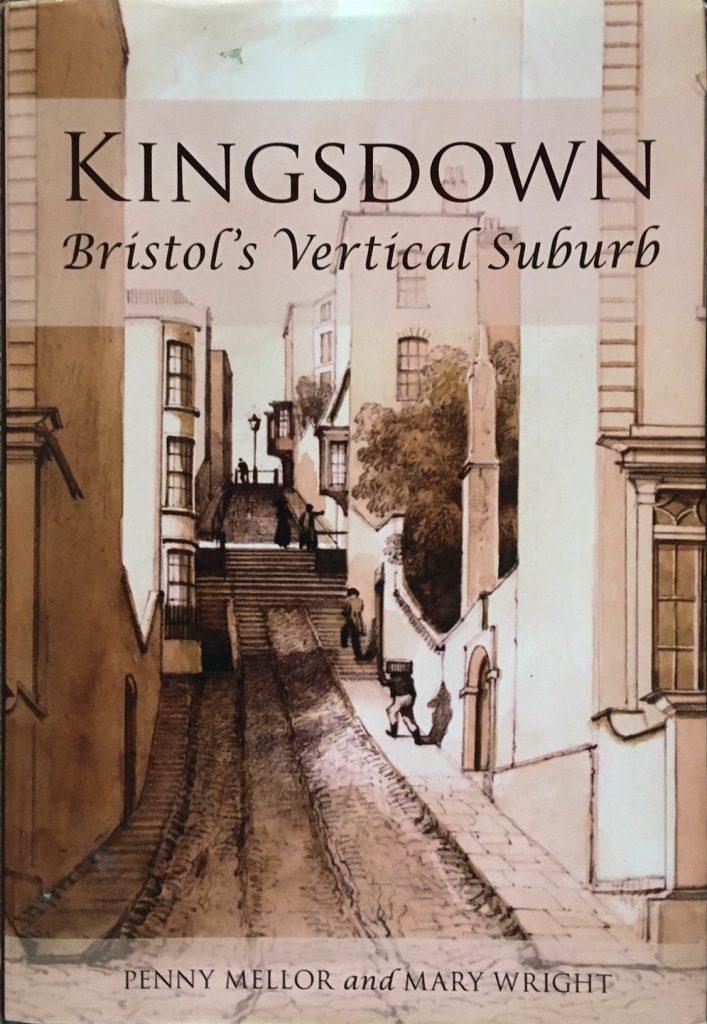 The book has 128 pages with 60 colour illustrations, and you can get it from Waterstones, the Bristol City Museum Shop, the publishers – www.phillimore.co.uk or Amazon


Here’s an extract from the blurb: Kingsdown was built as Bristol’s first planned suburb in the 18th century. At the time it was well known locally as the site of an important Civil War fortification and appreciated as an airy, green space just beyond the crowded medieval city. The land had once belonged to the Benedictine Priory of St James but Henry VIII’s Dissolution resulted in the fragmentation of land ownership. The consequent sale of lands to wealthy entrepreneurs in the 16th and 17th centuries provides the first documented description of Kingsdown.

Crucial battles for Bristol were fought on the heights of Kingsdown during the English Civil War and a related love story still survives in local folklore. The Georgian suburb which appeared during Bristol’s golden age became increasingly fashionable, but the economic collapse that followed the outbreak of war with France at the end of the century led to the financial ruin of many of the investors and developers who were building Kingsdown. The Victorian and Edwardian periods were a time of consolidation, sanitary improvements and growing urbanisation, as Kingsdown was incorporated into the City of Bristol. Improved transport links and the attractions of the outer suburbs drew residents away from the inner areas and Kingsdown’s social status slowly declined, its physical fabric subsequently deteriorating.

A lack of maintenance, coupled with Second World War damage and the post-war zoning of the Kingsdown slopes for hospital expansion and municipal housing, resulted in the 1950s clearance of those houses deemed to be unfit. Passionate protests accompanied their destruction and are recalled in this lively illustrated account of a fascinating and singular area. The story ends on a positive note by celebrating the survival of the streets on the hilltop. The area’s architectural qualities are the subject of growing appreciation and a vibrant community makes the care for Kingsdown’s unique heritage a priority.

“A Kingsdown Community” focusses on St James Place (now nos. 48-86 and 65-101 Kingsdown Parade – see the 1826 map for the location). You can get copies from Penny at 52 Kingsdown Parade, or from Bristol Architecture Centre (details can be found under the Links section of this site)

Penny’s other book – A Kingsdown Collection – is unfortunately out of print (though you can probably borrow one in the neighbourhood): 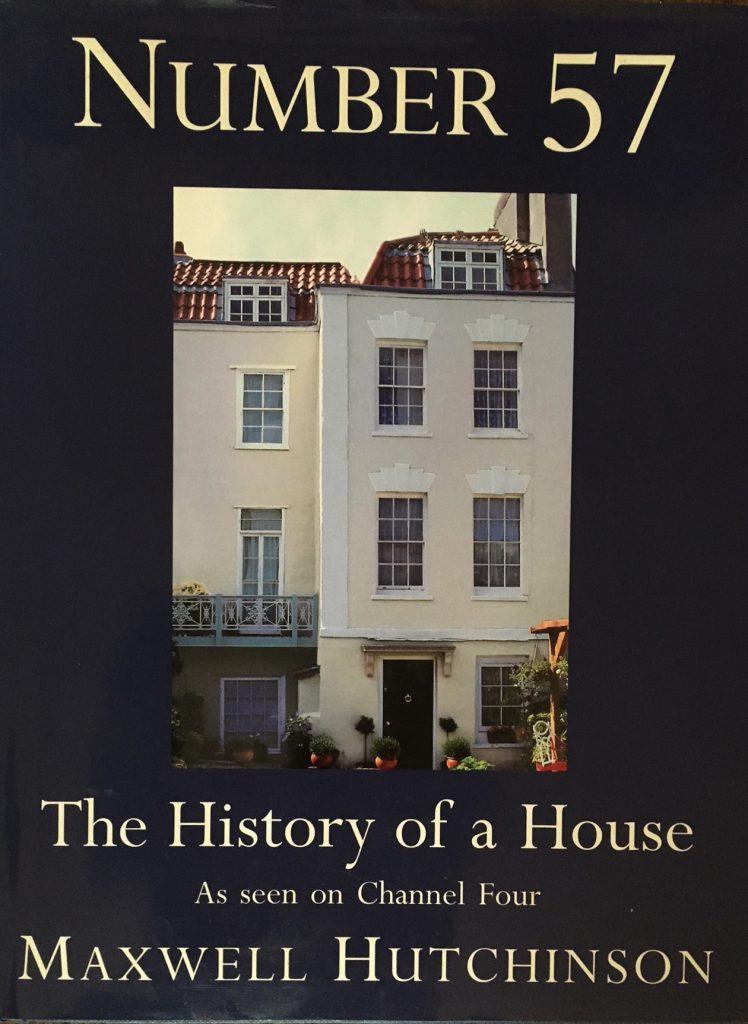 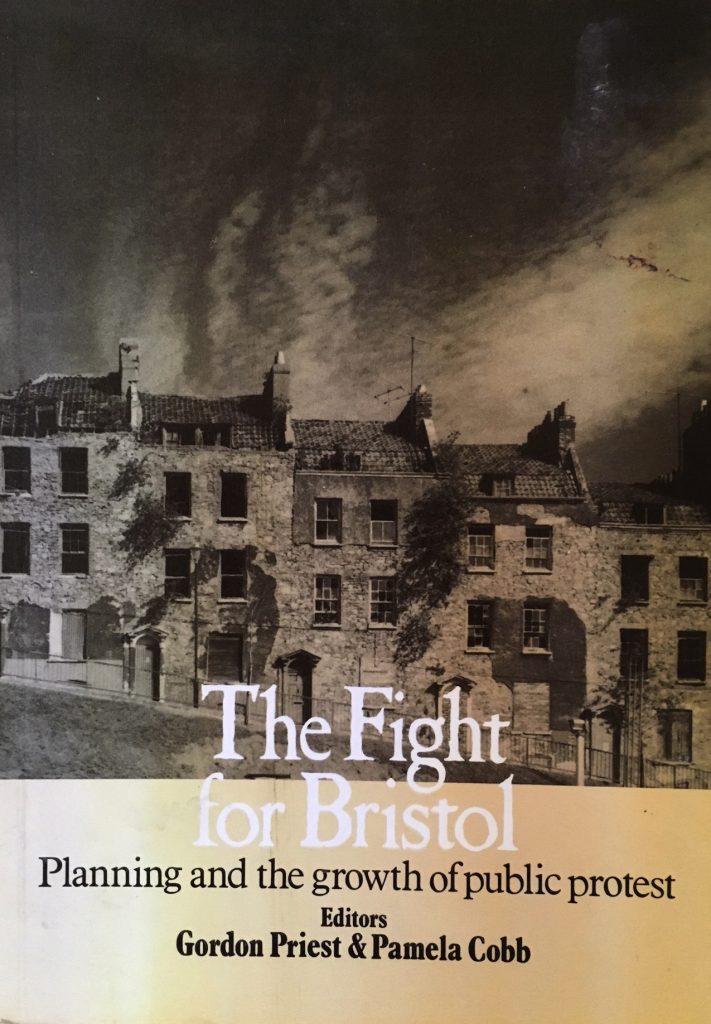 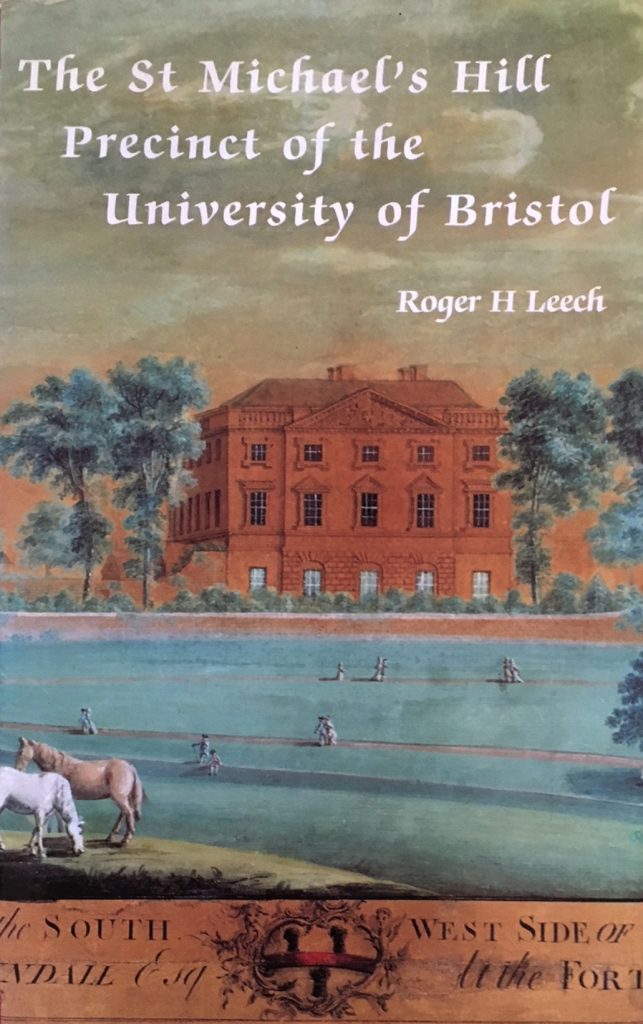 You are a subscriber to the Kingsdown Conservation Group email list which uses MailChimp software to send out it’s occasional emails to members. We never attempt to sell you anything via this system.

As a result of the General Data Protection Regulation (GDPR) MailChimp has updated its Privacy Policy and Terms of Use, effective May 23, 2018. Please feel free to review this policy here: https://mailchimp.com/legal/privacy/ . If you no longer wish to receive these emails, please click on the unsubscribe link below.

“Thanks for this lovely website. I am interested in finding out if 57 Kingsdown Parade was lived in by my several greats grandfather, John Brittan, a very special pottery man who was manager of Champions porcelain company. I do know that his grandson Meshak Brittan, lawyer, lived in Somerset Street. Any idea if there is information or documents of interest in this matter?”

Alison at No.57 kindly provided the following information:

“I have checked in the book that came with the Channel 4 series about our house – Number 57, the history of a house (Maxwell Hutchinson). This lists the occupants that they were able to trace. It gives John Britton as living here from 1786 to 1791. I will send you a photo of the entry. It doesn’t give any other information specifically about him, just information about general Georgian life at that time.”

Extracts from the book: 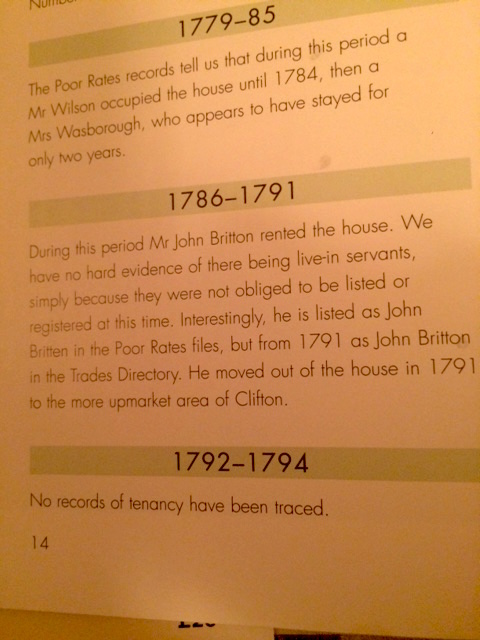 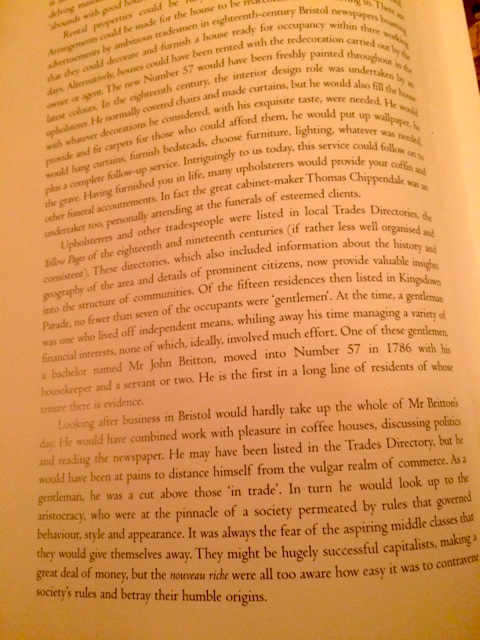 It’s great that the website is providing a point of contact for those researching the diverse and interesting past of our area.

I received a fascinating email from Tami Thomas in Lima, Ohio USA. The drawing she attached is marked on the back as “Kingsdown 3 Sept. 1829” and the hand written text reads:

“W Reed gave this drawing to his niece and adopted child Elizabeth Reed daughter of Capt. William Reed of Tenby in the Parish of Pembrokeshire. I Brother to [Mr or M] Wm Reed of Kingsdown St. James’ Parish Bristol My Dear and well beloved wife.
William Reed
witness M Morgan” 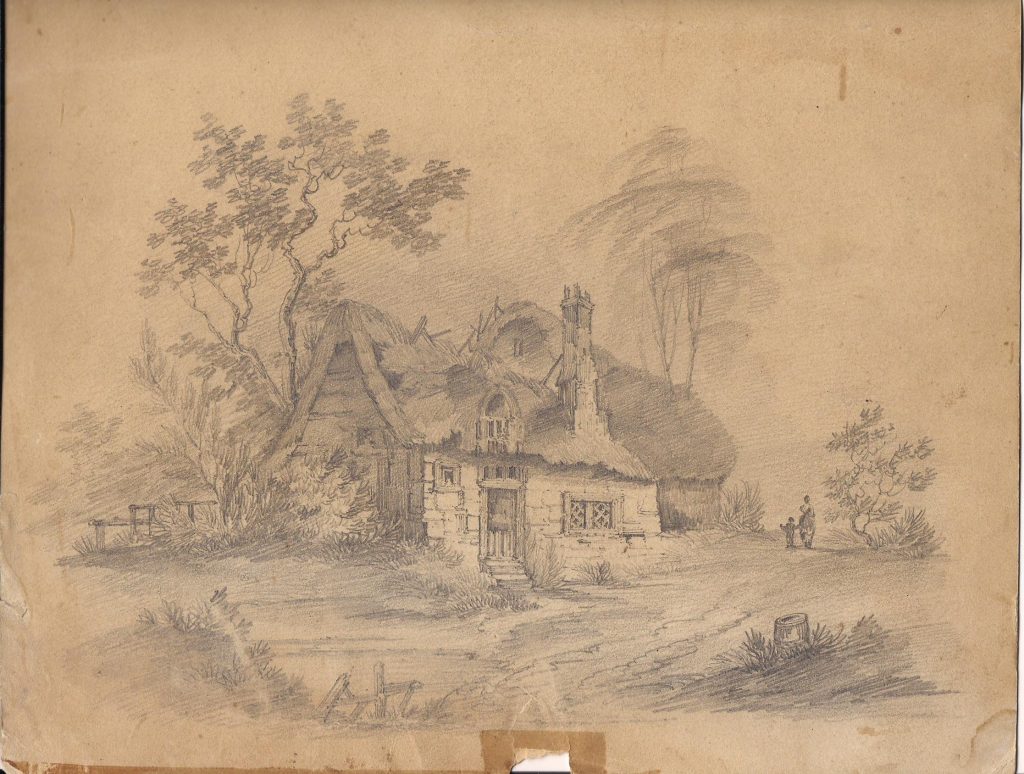 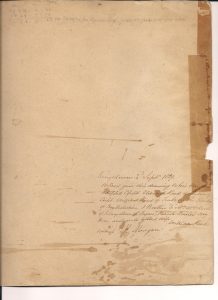 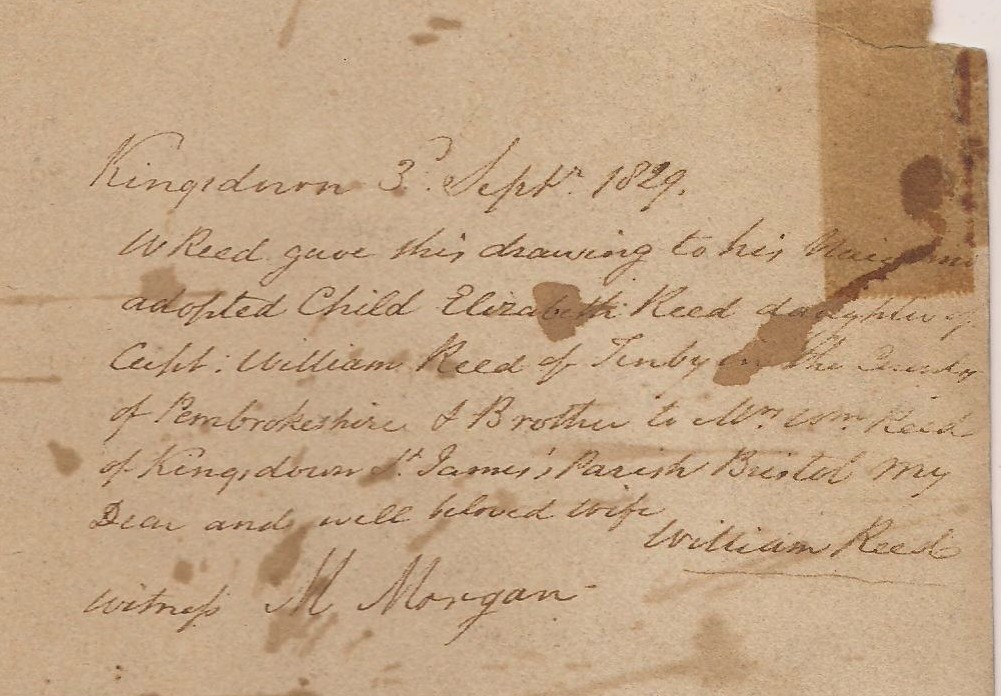 The the notes in pencil (written in 1922) at the top seem to be where someone else who obtained this drawing had figured out the ages of the two figures in the drawing. It reads as follows:

Tami is researching her genealogy and acquired this drawing along with a great stash of pictures from the Reed and Kynaston families of Bristol. She was researching Kingsdown when I came across our webpage and also states: “It’s a bit of history that might ring a bell with one of your viewers. I’d love to gain more information about the Kingsdown connection.” 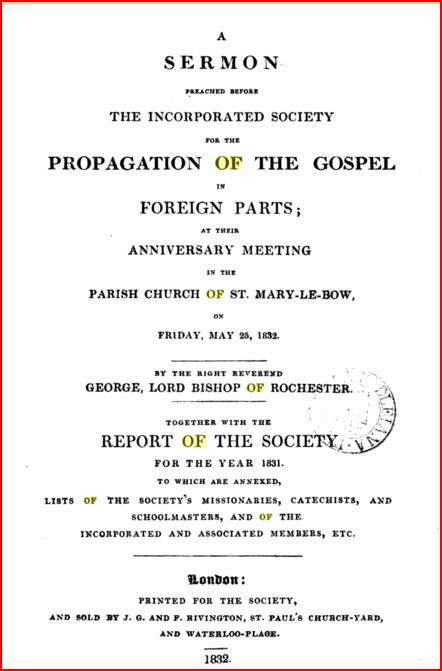 Please either add any comments here or send directly to her at:
Tami Thomas
thomaspartyof4@woh.rr.com
Lima, Ohio

Minutes of a committee meeting of Kingsdown Conservation Group
held on 10th March 2017
Members present: Andy King (chair) Helen Phillips, Pauline Allen, Richard Harrad, David Winter, Nick Kidwell, Jeremy Newick (minutes), Joel Baillie-Lane
Also present: Josh Brooman
Apologies: Nigel Tasker [emailed but not received]
The death of Charles Grant on 28th February, a longstanding and greatly valued member of the Group, the committee and the community, was noted, with considerable sorrow and regret.
Lorna and Paul Robinson had decided to stand down from the committee. Members expressed gratitude for and appreciation of their contribution over recent years. Lorna would continue her role as joint membership secretary.
The minutes of the previous meeting were approved.
Matters arising:
17/00360/F, 6 Kingsdown Parade – JN had lodged a letter of support on behalf of the Group.
Arts and Social Sciences Library, Tyndall Avenue: AK had made initial steps with the aim of persuading the council to add the building to either the register of locally listed buildings or as an Unlisted Building of Merit in the Tyndall’s Park Conservation Area.
The stilt hedge on Montague Green had been cut by council operatives in February.
Agenda items:
Spring Hill: PA had proposed the Group should discuss the possibility of offering £3000 from KCG’s Spring Hill Fund, via Central Clifton and Hotwells Neighbourhood Partnership Environmental Sub-group, to help pay for the postulated replacement of the existing handrail on the steps of Spring Hill, below Dove Street. The steps are currently being repaired. It was possible that Section 106 money (from a nearby development on Dighton Street) may be available, together with additional funds from council allocation.
The virtues of maintaining the existing handrail as it stands were raised. It was felt that a quote of the cost of replacement should be established, before the notion could be discussed further. PA agreed to pursue such a quote.
The imminent closure of The Kingsdown Vaults on Kingsdown Parade: Evidently Cllr Anthony Negus had expressed a commitment to engineer an attempted transformation of the existing pub into a community asset and enterprise. JB-L would pursue Cllr Negus.
The United Bristol Hospital Trust Quarterly Community Meeting should be held shortly. Cllrs Kye Dudd and Paul Smith are reportedly opposed to the demolition of the block of flats on Eugene Street which would be incurred as collateral damage by the building of the proposed multi-storey car park.
NK and JB-L had attended a pre-application presentation of Unite’s scheme to redevelop the land between Lower Maudlin Street, Marlborough Street and Whitson Street. The proposal would most unfortunately demolish Paty’s BRI Old Building and Fripp’s Chapel. JB-L would draft a response.
The University of Bristol’s Consultation on Tyndall Avenue Public Realm: Alastair Gambles, NK, JB-L & JN had attended a meeting on 1st February.
JN had lodged a response on behalf of KCG with the Vice Chancellor, the Bursar and Avril Baker Associates.
UoB’s pre-application to privatise Tyndall Avenue: AK to forward the KCG response to the City Council.
AGM to be held at 7.00 for 7.30-10.00 at the Undercroft of St Matthew’s Church 27th April. Notices and agenda to be posted.
JB-L is to stand down as secretary at the AGM but wishes to remain a committee member.

St Michael’s on the Mount Without: A public meeting is to be held at the Wills Memorial Building at 6.00pm 6th April. All interested parties are welcome to attend. Discussion will include details of the Civic Society’s architectural competition to address the conundrum of the fate of the grade II* listed church, the main body of which was recently gutted by fire.

Next committee meeting: 1st June. Whereabouts to be arranged. 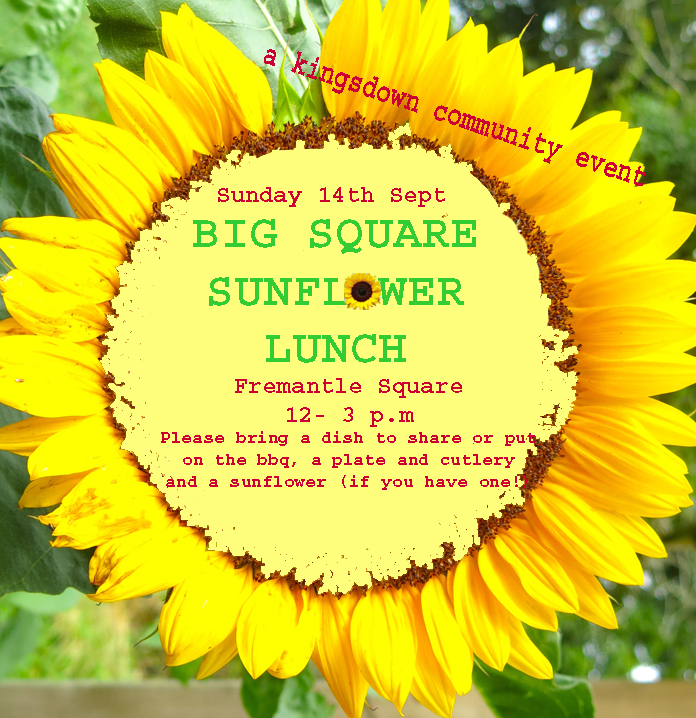