The university has submitted an application to close Tyndall Avenue to traffic, remodel it as a pedestrian and cycle route and to manage it as part of their estate. Bus routes will be diverted via S Michael’s Park.

KCG has raised concerns over this proposal at pre-app stage (see attached) and will be writing regarding the proposals now submitted for planning consent.

There are three applications:

All can be found on Bristol City Council website (https://www.bristol.gov.uk/planning-and-building-regulations/look-at-and-track-planning-applications)

We would encourage people to write in regarding the application, which can be done online.

The deadline for comments is 4th January 2018

This plan can be viewed on our noticeboards 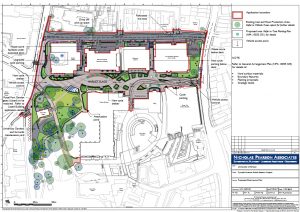 Our Response to the Pre-Application August 2017

Kingsdown Conservation Group (the Group) is grateful for the recent opportunity to see the current version of the University’s proposals for Tyndall Avenue and St Michael’s Park.
The Group notes that there appears to be a tacit understanding between the City Council and the University that the desire to “maintain two-way vehicular traffic” on Tyndall Avenue described in the University’s Strategic Master Plan, SPD 11, has been abandoned; indeed, the “Stopping up of Tyndall Avenue” was a requirement of the brief written by the University with regard to its present enterprise of re-landscaping Tyndall Avenue.
If it is the case that the City Council has accepted the principal of overturning SPD 11 in this respect, the Group sees no benefit in prolonging the argument, although it recognises that the problematic matters associated with privatisation of a public street concerning rights of access, behaviour, assembly and so forth, should be aired as soon as possible.
Despite the efforts of consultants to present St Michael’s Park as a feasible alternative thoroughfare, there remains a strong feeling that St Michael’s Park will not easily carry the volume of traffic required. Of particular concern to the Group, the turning circle of buses seems to have caused a proposal to realign the pavement at the south-eastern corner of the boundary wall of the Queen Anne, Grade II listed Oldbury House. Historic England’s listing description particularly notes both the symmetry of the entrance front of the building and its wrought-iron front garden railings; neither should be upset.
At some later date, the restricted scale of the junction of St Michael’s Park and St Michael’s Hill caused by execution of the University’s present grand project should not be used as an argument to support a proposal to demolish Twist and Whitley’s increasingly valued Arts and Social Sciences Library.
The Group is not persuaded of the virtue of the loud, swirling paving proposed for Tyndall Avenue. It is felt that the orthogonal character of the street should inform the landscape of the space between the buildings. The proposed, diverting pattern-making seems to be intended to conflict with the established streetscape: it would lead one’s attention away from the experience of being at the core of the institution. Each building’s architectural qualities should be celebrated, as the street presents of series of stylistic approaches, that in combination tell a valuable story of the development of the University.
While the Group welcomes the ambition to extend the ecology of flora and fauna of The Royal Fort into Tyndall Avenue, the proposed planting of stilt hedges, trees and other associated features should make the most of the present geometry of architectural form, mass and perspectives, rather than present the onlooker with confusing cross-currents, scattered with the misplaced forms of a retreating tsunami.

3 Responses to “Closure of Tyndall Avenue”